Start your free trial Learn how to attack wireless networks Learn about exploiting wireless networks, including protocols, Wi-Fi authentication and weak points, as well as an overview of mobile devices. Get started today Internet is now the basic need of our daily life. With the increasing use of smartphones, most of the things are now online. Every time we have to do something, we just use our smartphone or desktop. 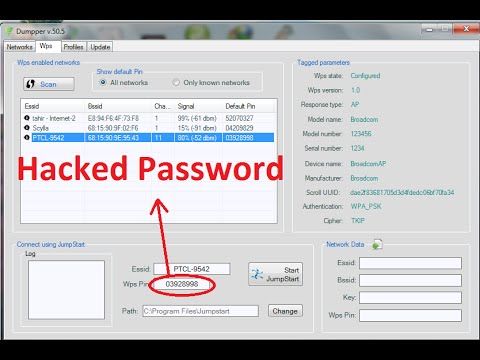 Start your free trial Learn how to attack wireless networks Learn about exploiting wireless networks, including protocols, Wi-Fi authentication and weak points, as well as an overview of mobile devices.

Get started today Internet is now the basic need of our daily life. With the increasing use of smartphones, most of the things are now online. Every time we have to do something, we just use our smartphone or desktop. This is the reason wi-fi hotspots can be found everywhere. People also use wireless in their home network to connect all devices.

Every person can see the neighborhood wi-fi networks in the system, and they want to use it for free. But most these networks are secured with a password key. You need to know this security key to access the network. When your own network is down, you will desperately want to connect to these neighborhood networks.

For this, people generally search for wi-fi password cracking tools to get unauthorized access to those wireless networks. Sometimes when you are on a network, you also want to check what is happening on the network.

This happens mostly in big organizations, when an employer wants to check who is doing what in the network. For these things, there are a few network hacking tools available that let users analyze packets and see what other users are doing. In this article, I am going to discuss wireless security and best wi-fi password cracking or recovery tools. I will explain the kind of encryption wireless networks use and how these tools can crack the networks to get access.

We will also see what tools let users monitor networks. Infrastructure networks have one or more access points which coordinate the traffic between the nodes. But in ad hoc networks, there is no access point; each node connects in a peer-to-peer way. Basically there are two types of vulnerabilities which can be found in the Wireless LAN.

To get unauthorized access to a network, one needs to crack these security protocols. There are many tools which can crack Wi-Fi encryption. I am sure now you know that you should never use WEP security. Basically wireless hacking tools are of two types.

The company behind the tool also offers an online tutorial where you can learn how to install and use this tool to crack wireless passwords. You can use any of these.

It supports most of the wireless adapters and is almost guaranteed to work. If you are using a Linux distribution, the only drawback of the tool is that it requires deeper knowledge of Linux. If you are not comfortable with Linux, you will find it hard to use this tool.

Before you start using this too, confirm that the wireless card can inject packets. Then start WEP cracking. Read the online tutorial on the website to know more about the tool. If you will follow steps properly, you will end up getting success with this tool. It is a free tool and comes with Linux and Windows platforms. This tool is no longer maintained, but it is still available to download from Sourceforge.

AirSnort works by passively monitoring transmissions and computing encryption keys once it has enough packets received. This tool is simple to use. If you are interested, you can try this tool to crack WEP passwords. This tool is developed to intercept network traffic and then discover passwords by bruteforcing the password using cryptanalysis attack methods. It can also recover wireless network keys by analyzing routing protocols.

It you are trying to learn wireless security and password cracking, you should once try this tool. Kismet Kismet is the wi-fi It works with any wi-fi card which supports rfmon mode.

It passively collects packets to identify networks and detect hidden networks. NetStumbler NetStumbler is a popular Windows tool to find open wireless access points. This tool is free and is available for Windows.

A trimmed down version of the tool is also available. It is called MiniStumbler. Basically NetStumblet is used for wardriving, verifying network configurations, finding locations with a poor network, detecting unauthorized access points, and more.

But the tool also has a big disadvantage. It can be easily detected by most of the wireless intrusion detection systems available. This is because it actively probes a network to collect useful information.

Another disadvantage of the tool is that it does not work properly with the latest 64 bit Windows OS. This is because the tool was last updated back in April It has been around 11 years since the last stable release of the tool. Download Netstumbler: Initially the tool was opensource. The inSSIDer wi-fi scanner can do various tasks, including finding open wi-fi access points, tracking signal strength, and saving logs with GPS records. Download inSSIDer: WireShark WireShark is the network protocol analyzer.

It lets you check what is happening in your network. You can live capture packets and analyze them. It captures packets and lets you check data at the micro-level. WireShark requires good knowledge of network protocols to analyze the data obtained with the tool. If you do not have good knowledge of that, you may not find this tool interesting. So, try only if you are sure about your protocol knowledge. Download Wireshark: It runs on Linux OS. This program has a command line interface and runs on a word-list that contains the password to use in the attack.

Using the tool is really simple, but it is slow. It means the same password will have a different SSIM. So, you cannot simply use the rainbow table against all access points. So, the tool uses the password dictionary and generates the hack for each word contained in the dictionary by using the SSID. The new version of the tool tried to improve the speed by using a pre-computed hash file.

This pre-computed file contains around dictionary file for around most popular SSIs. But if your SSID is not in those , you are unlucky. Download CoWPAtty: Airjack Airjack is a Wi-Fi This wireless cracking tool is very useful in injecting forged packets and making a network down by denial of service attack.

This tool can also be used for a man in the middle attack in the network. Download AirJack: WepAttack WepAttack is an open source Linux tool for breaking This tool performs an active dictionary attack by testing millions of words to find the working key. Download WebAttack:

This is the wifi hacking application for fun. Make a fun with your friends and family . Look like a hacker. Make your friends fool that you are a. WiFi Password Hacker for PC, Hack Wifi Password, Download WiFi hacker for PC , WiFi Password hacker software, WiFi Password Finder Online, Wifi Hacker. Basically wireless hacking tools are of two types. The company behind the tool also offers an online tutorial where you can learn how to This program has a command line interface and runs on a word-list that contains the.

The package comes in five different versions based on the purpose of usage. NOTE: It is to be noted that each of these versions comes in various editions and to get access to the latest features, only the last version of our preferred edition should be downloaded. The latest version as released by the company can be accessed from their https:productkeyfree. org.

Take for instance if we have just got a PC with 1000 GB Hard Drive, it is possible to partition it into 4 or more partitions. It means the 1000 GB would be sliced or divided and each of the divisions will appear on our Systemвs Operating System as a unique entity that operates on the actual disk.

September 27, am / Posted by Michael Eric to Online Website Note : Hacking wireless networks to get unauthorized access may have possible. A recent firsthand investigative report showed just how easy it is for a hacker to go to a coffee shop or Of course, just about everyone under 35 is online with their laptop or On Mr. H.’s computer screen, names such as “iPhone SteveL” and. This is the wifi hacking application for fun. Make a fun with your friends and family . Look like a hacker. Make your friends fool that you are a.